Robert was one of my pupils at Royal High.  He built most of this banjo in a single week, in May / June 2012, when the school’s usual teaching timetable was suspended and pupils were offered a selection of alternative activities.  Robert was in year S2.

I marked out and rough cut the neck and instrument stand at the band saw, but Robert did almost all the rest. 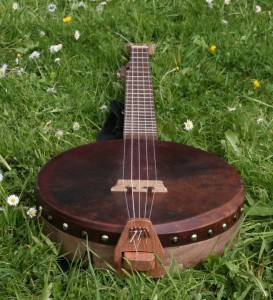 Calf skin was soaked in coffee, to accentuate its natural colour variations, then stretched over a brass tone ring and fixed to the rim with furniture tacks. The brass tone ring was formed in school from 6mm round bar, bent using a ring roller. Its ends were soldered together at the brazing hearth.  You can see from the photo above that the tone ring wasn’t completely circular.  All the same, the instrument sounded fine.

Guitar fret wire has been used instead of banjo wire, as it’s easier to press in place than banjo fret wire. The neck was fixed to the rim using cast aluminium brackets (cast in-house) and hardwood wedges. Steel strings were fitted.

The instrument stand is made from 4mm birch plywood.  Its components are a friction fit, and easily dismantle for transportation in an instrument bag. Bicycle rubber inner tube has been glued to the plywood, to prevent the banjo being marked by the stand.

High Resolution photos of the finished banjo, along with construction images, are available at Royal HIgh CDT’s Flickr account: