As I write, it’s May 2020 and the coronavirus lockdown is ongoing.  It’s been just over five years since I last ran a banjo building workshop, during the 2015 Easter holidays at Forfar Academy.  For one reason or another, my planned build at Forfar Academy the following year didn’t go ahead and I haven’t re-visited the project for some time.

If you’re a teacher in a secondary school in or near Dundee: Angus; north Fife; east Perthshire; and would be interested in having me run a banjo building project in your school please get in touch.  I’d also consider further afield depending on travel time / arrangements.

Those pupils at Forfar Academy who expressed an interest in building a banjo, back in March 2016, may be wondering what happened.

I’m still waiting for confirmation from the school that indemnity insurance will be extended to me while running the course.  Apparently, there won’t be a problem but I haven’t yet had word.

As soon I receive confirmation, we can get started.

Commencing after the Easter Holidays, on 12th April, a small number of pupils will have the opportunity to build their own banjo, from scratch.

Workshop time will be programmed on Tuesdays and/or Wednesdays, immediately after the school day.  The cost will be £45 per person in total.  This covers materials and banjo hardware used.  The school may be able to subsidise this figure.

If you’re interested in building your own banjo, come along to an initial meeting in room 521 on Wednesday 9th March, to learn more.

The first Banjoworks workshop ran during the school Easter holidays, over nine days.

Daniel completed his banjo over nine days during the school Easter holidays, 2015.

Scott completed his banjo over five days during the school Easter holidays, 2015.

Robbie completed his banjo over nine days during the school Easter holidays, 2015.

The first banjo workshop will run during Easter holidays 2015 at Forfar Academy.

Numbers will be limited to ten pupils, from S2 and S3.  An initial meeting, to introduce the project to pupils, will be held in room 521 at 1.15pm on Wednesday 18th February.

An introductory letter for parents is available to download here.

A parental consent form is available to download here.

This project is the blueprint for what I hope will be achieved with BanjoWorks.

In May 2012, the normal teaching timetable at The Royal High School, where I then taught, was suspended and pupils were given the opportunity to try other activities. I offered eleven S2 and S3 pupils the chance to build a banjo in five days.  Nine out of the eleven completed their instruments by the end of the week.  The two who didn’t were each absent due to illness for at least one day during the week but completed their banjos afterwards.

To ensure that pupils would succeed in completing their banjos within the week required a fair amount of preparation and a small amount of pre-building by the teacher.  A more realistic, leisurely time frame, with pupils carrying out almost all work themselves, is probably seven to eight days.

Some workshop photos were taken during the week and are available at Royal High CDT’s Flickr account:

Sixth year pupil Stuart Clark visited the workshop on the Friday and made the following video recording:

The week after the event, some of the pupils assembled to have group photos taken.  Here is a video recording made then: 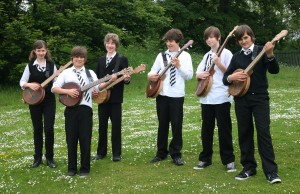 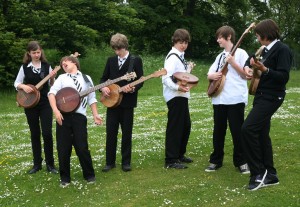 Photos and video recordings of pupils’ banjos are available as follows:

Kenny was one of my pupils at Royal High. He built this banjo as the final project for the Standard Grade Craft & Design course, working on it from September 2012 until March 2013. I marked out and cut the neck at the band saw, but Kenny did almost all the rest.  It was one of the best banjos built in the department.

The rim (pot) was turned on the wood lathe from twenty-four hardwood segments. The neck was laminated pine with a purple heart hardwood finger board and peg head veneer. Calf skin was stretched over a brass tone ring (rolled and soldered in-house) and fixed to the rim with furniture tacks. Guitar fret wire has been used instead of banjo wire, as it’s easier to press in place. The neck was fixed to the rim using cast aluminium brackets (cast in-house) and hardwood wedges. Nylgut (nylon) strings were  fitted.

High resolution photos of the banjo are available at Royal High CDT’s Flickr account.   Each photo is captioned with construction information.

Work in progress photos of a similar banjo being built are available here: